Hello again from Savannah! Despite my failure to make regular appearances here, I actually have been doing quite a lot of cooking. The problem is there are not enough hours in the day to cook AND write about it AND work AND have fun with friends (I am in my twenties… this is a priority).  Writing is the activity that gets shoved to the bottom of the list, but I will attempt to do more than 1 post per month.

I have always had a thing for Italian cuisine, but lately the carb cravings have intensified. Chalk it up to a highly active job, plus running, plus a relatively high metabolism. Anywho.

This little recipe popped out one night and it beat the cravings for a good 2 days!  It called for linguine, but I used good ol spaghetti just ‘cuz. 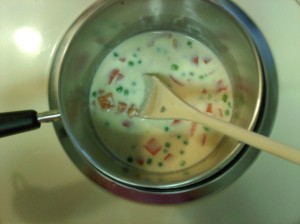 Cook noodles according to the package directions. In a small saucepan, combine the next five ingredients. Cook and stir over medium-low heat until mixture coats the back of a metal spoon. Stir in ¼ cup cheese and peas. Heat through. Drain noodles, toss with sauce. Sprinkle with the remaining cheese. Eat immediately, like I did, with a side of corn tortilla chips, or stick it in the fridge and eat later, which I also did. Yum!