Have you ever wondered what to do with all those late-season green tomatoes still on your vines?  You know the ones…those that are too small to ripen before the frost comes but too big to just leave out on the vine and go to waste.  Several members of my family enjoy fried green tomatoes, but that gets a little old after awhile.

Several posts ago I wrote about Tomato-Strawberry preserves. Have you tried them yet?  They are delicious!  So I thought that maybe there were a few recipes out there using green tomatoes for preserves.  Sure enough! I found several recipes on the internet for Green Tomato Preserves.  Our ancestors were never ones to let food go to waste, especially those ladies out on the prairies or those who lived through the Great Depression.  They used everything that could be used to provide food for their families.  This recipe was used by a grandmother in the 1800s.  Her granddaughter discovered the recipe, but had to try and change the amounts since nothing was in today’s standard measures.

I’m sure that original recipe tasted much better than mine!  I’m not sure what I did wrong but it certainly is on the tart side!  I cooked it even longer than the suggested 3 hours, but it still didn’t set well.  It has actually thickened a bit more since it has been sitting on my counter.  And the color of mine is more brown than dark green.  It could be because I cut the amounts in half since I didn’t have the required 8-1/2 pounds of green tomatoes, although I don’t think that was the problem.  Oh, well!  This blog is all about experimenting, isn’t it! 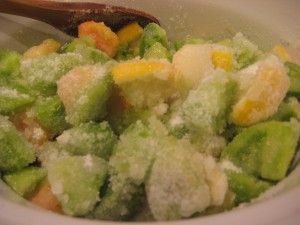 Bring to a boil and cook about 3 hours.  The mixture must completely break down and the liquid become dark green.  Stir frequently.  Pour into hot canning jars and process according to canning directions.