Serving healthier meals is getting to be a priority in our family.  This is not an easy task especially since I love baking breads and desserts!  However, when I can get good deals on meats like fish, I do try to create great-tasting yet healthful meals.  I discovered this recipe the other day in my Great American Recipes cookbook.  Although I did not have cod in my freezer, I did have tilapia which worked just great!  Give it a try! You just might enjoy it, too.  I made quite a few other changes, too, since I didn’t want to have to make a special trip to the grocery store just to make the recipe exactly as written!  I will list those changes at the end of the recipe.

Cut 4 squares of aluminum foil large enough to encase the fish.  Lightly spray each piece of foil with vegetable oil.  Layer the onions and carrots  in a small pile in the center of each piece of foil. Divide the garlic and ginger on each pile.  Divide cilantro evenly on top of each.  Place 1 cod fillet on top of each. Sprinkle each with soy sauce, sesame oil, and sugar.  Place a slice of lime  on top of each.  Bring up the sides of the foil and fold to seal completely.  Place on baking sheet and bake at 475degrees for about 15 minutes or until fish is flaky and tender and vegetables are done.  Serve with a side of wild rice. 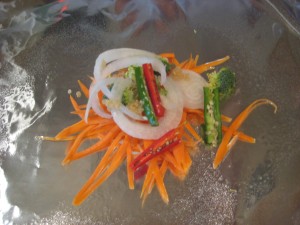 Changes I made:  Tilapia fillets are thinner than cod, so I used 2 per pack instead of just one.  I used broccoli pieces instead of cilantro. Also, I used rings of yellow onions instead of green onions. I used powdered ginger instead of gingerroot.   I added strips of red bell pepper and hot peppers to the packs. I used lemons instead of limes. 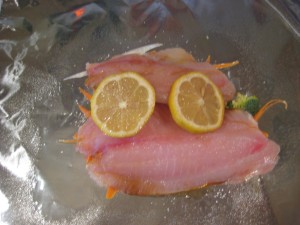