Even though I have shared apple pie recipes before, I just had to include one more!  It tastes absolutely amazing!  A friend  (thank you, Lauri!) sent it to me thinking that I might like it…and I do!!  It is not made to enter into a contest for the best looking apple pie, for it is a rustic looking pie, created to cut and place into a lunch for those on the go.  I think that the secret to the flavor is using several different varieties of apples!  I used Granny Smith, Honey Crisp, and Red Rome for a delicious flavor!  It’s just perfect for this time of year!

Peel, core, and slice about 18 apples of various varieties.

Mix the flour and salt in a mixing bowl.  Cut in shortening with pastry cutter until shortening is pea-sized. Add the white vinegar and half the water. Mix the water in with a fork. Continue adding water until incorporated. Dough does not need to be formed and should be loose.  Split the crust so that 2/3 is for the bottom crust and 1/3 is for the top crust.

Form the 2/3 crust into an elongated form and roll it out flat. Make sure that it is larger than the pan. Give yourself depth on the edges. The extended overlap edges are used to roll/tuck up the sides.  Once rolled out, place the rolled crust on the bottom of a 15 x 10-1/2 inch jelly roll pan that is about 1 inch deep. (I used a smaller pan which is 2 inches deep.)

Fill the bottom crust with sliced apples…heap them on high since they will cook down.  Sprinkle with the sugar, brown sugar, and cinnamon. Divide the stick of butter into pieces and place on top of the apples and sugar. (I mixed the sugars with the cinnamon and mixed it with my apple slices.)

Bake for 20 minutes at 400 degrees. Reduce heat to 350 and bake a remaining 40 minutes. The crust should be golden brown. Remove pie from oven and completely cool.  Make glaze by mixing powdered sugar and water. Brush over the top of the pie. 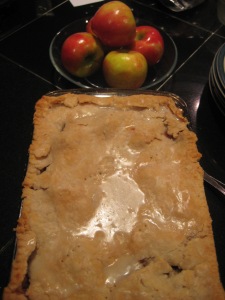