As I mentioned in a post several weeks ago, we have been getting lots of peppers this year…mainly our hot peppers, although the bell peppers aren’t doing too badly either.  My hubby is the only member of the family who enjoys eating hot peppers freshly picked from the plant.  The kids enjoy them in salsa and shrimp dip, but never just eating plain!  Since we have such an abundance, I have been working on ways to preserve them for future use.  The hubs came up with the idea of pickling them, so I did some searching for a good,  easy recipe.  None of my favorite cookbooks had recipes for pickling peppers, so I went to the internet like any modern-day lady would do.  Sure enough! I found several recipes!  This one came from allrecipes.com and calls for padron peppers.  I don’t have any of that variety, but have tons of jalapenos and hot chili peppers.

http://allrecipes.com/recipe/pickled-padron-peppers/detail.aspx  I used 2 small jars and cut the peppers in half instead of using a quart jar with whole peppers.

The other day as I was making hamburger patties, I started reminiscing about my mom and the way she did things in the kitchen.  I realized that my hamburger patty shaper is the same one she used for years!  This of course got me thinking about other kitchen tools I have that once were hers.  I pulled out a few of these to share in a picture with you.  The canning funnel, hamburger patty shaper, and gravy shaker are all made of aluminum, and must be about 57 years old!  The whisk was given to my mom years ago before we ever moved from NJ, so it also is quite old, probably about 45 years old.  I still use all of these except the gravy shaker.  I just can’t seem to get the lid on tightly enough to keep it from leaking when I shake it! 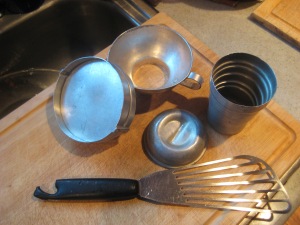