We in the south have survived the major flooding that hit our state over the weekend! Thankfully, it was not as bad in our area as it was and still is in the midlands and low country. Tim had to empty the rain gauge during the course of the weekend, and he estimates that we got between 7 and 8 inches of rain! That’s a lot of rain in just one weekend! Although we did have some water seep into the basement, it was not a lot and didn’t do damage. All our trees are still standing, and we never lost our electricity. We have much to be thankful for!

For our garden this year, the hubby decided to build raised beds. He also decided to make his own soil so that he would have just the right nutrients for the plants he was trying to grow. For the most part his experiment worked well, but he will probably make a few changes for next year’s garden. Last evening the hubby began digging up his sweet potato crop. He had one entire bed with just sweet potatoes in it. Here is what he dug last night. 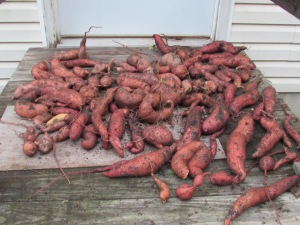 It is a good thing that my favorite grocery store was out of sweet potatoes last week when I did my shopping! We won’t be buying these any time soon! We were both amazed at not only the number of sweet potatoes that he got, but also at the size of some of them. As you can see here, my ruler is 13 inches long, and the potato is longer than that! 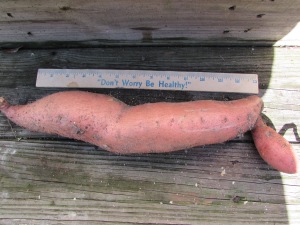 About a year ago, Tim was searching for recipes that would be ok on our THM eating plan. He came across this one for a Sausage & Sweet Potato Breakfast Frittata. I have made it a few times for him, and he seems to like it. As often is the case for me, I changed things from the basic recipe.  Take a peek at the original recipe. Then read what I did to change it! It is a good way to use up any leftover baked sweets.

I cut back on the amounts of ingredients since I didn’t need to serve 12. I made mine to serve 4-6.

I used sharp cheddar cheese instead of mild cheddar. I also used whole eggs…about 3 of them, well-beaten.

I used 1/2 pound of turkey sausage, and omitted the chives.  For the sweet potatoes, I used leftover baked sweets that I had from dinner the night before.

For the process, I sauteed the onions and peppers and browned the sausage, then added the eggs, cheese, salt and pepper. As it cooked a few minutes on the stove top, I peeled the potatoes and cut them into one-inch squares. I dropped the pieces on top of the mixture and then proceeded with the recipe by baking it in the oven.

*If you are in a hurry and don’t have time to bake it in the oven, keep it all in the skillet, cover and turn the heat way down for about 5-7 minutes. It tastes just as good!