I think that the week of October 28, 2012, will forever be etched in the memories of most Americans.  It is just unbelievable the devastation that occurred in the north eastern part of our country.  Hurricane Sandy was a powerful storm that showed no mercy when she struck our shores.  I am thankful that my family and friends who live in the affected areas are safe and that most of them have their electricity restored.

My family here at home had a little excitement last Sunday when our Sheltie, Rose, gave birth to just 2 puppies. Unfortunately, one didn’t make it. We were hoping for at least 4 or 5, but we are thankful that the one little guy is healthy and strong! Isn’t he cute? 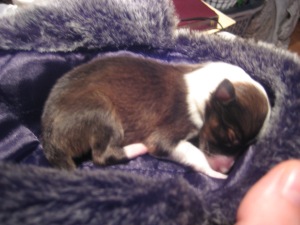 I finally got back into a baking mood today and made this recipe from my friend Gloria.  Of course, in keeping with the season, it is chock full of my favorite fall flavors…apples and cinnamon!  What’s the best is that it is really easy!

Combine apple slices, sugar, oil, applesauce, vanilla, eggs and pecans together in a large mixing bowl.  In a separate bowl, combine the baking soda, flour, and cinnamon.  Pour flour mixture over the apple mixture and stir well.  Spray a 13×9 baking pan, and pour apple mixture into it.  Bake at 300 degrees for an hour or until a toothpick inserted comes out clean.  Serve warm with whipped cream or vanilla ice cream.