Life has been busy (as usual) this last month. Things settled down to a normal routine after we survived the gazillions of people who descended upon us for the Great American Eclipse. Final child began another year of classes; the weather began a nice cool-down; and we lost our business. That last one there has been a cause of great stress and discouragement lately. We learned in July that we were probably going to be losing our best account because of the required re-bidding process. However, it didn’t totally happen until the middle of August. We’ve had our commercial cleaning company for almost 18 years. Because of the very low unemployment in our area, keeping great workers was getting harder and harder, and those great workers that we did have were wanting higher and higher pay. It is just not worth the trouble any more to keep it going, so we are now officially out of the cleaning business. It has been an emotional few weeks for me, but I need to remind myself that God has not failed to provide for us yet, and He never will. I must trust Him whatever the future holds.

Another event which brought lots of people to our area was Irma, that huge and powerful hurricane that did so much damage to Florida and brought so much rain even here. I have done my weekly grocery shopping on Thursdays for years. On the Thursday before Irma’s expected arrival, I went to the store and discovered this:

This empty cart corral was my first clue that this would be no normal shopping trip.  I was able to get one from a customer returning his, and continued into the store to do my shopping. Clue #2…no bread. Seriously, there was NO bread! A few other items were completely gone as well. At this point I was seriously wondering what was going on. Then I noticed a very orderly, very long line of people…the check-out line. There were actually 2  (only 2) very long lines of people wanting to check out. These people in line were stocking up for the coming hurricane. I guess they were afraid they would run out of bread and milk while Florida evacuees were in town. All I wanted to do was my normal weekly shopping, and it took me about 45 minutes longer than usual!

Happy family news…Grandbaby #4 is scheduled to arrive next spring!  Little Man will be a Big Brother! 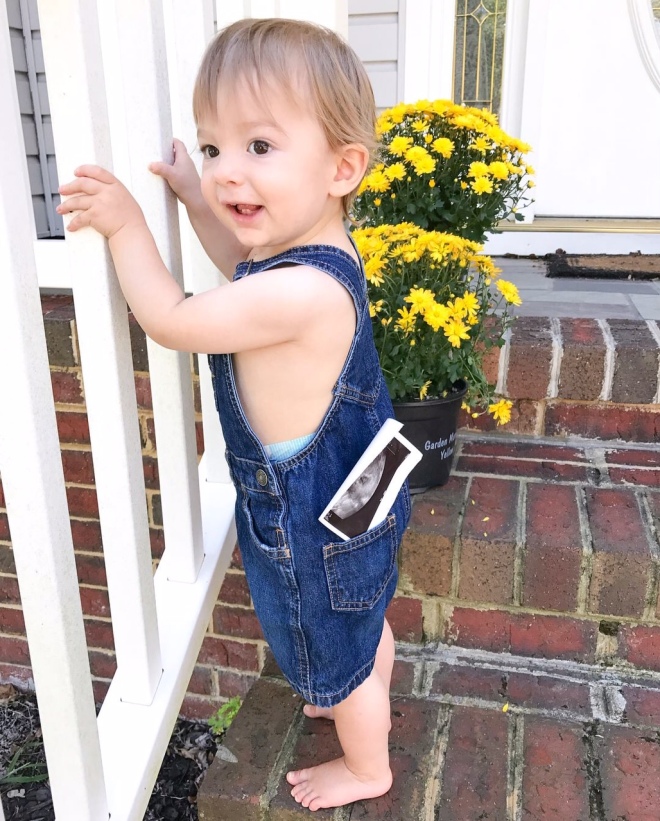 As many of you know, I have been trying to follow the Trim Healthy Mama way of eating for about 3 years now. I love the eating plan and feel so much better when I eat right. I am also a lover of cookbooks, so when the new cookbook came out, I was hoping to get a copy. Then we lost the business, and the desire for the new book went on the back burner. Thanks to another THM who is a complete stranger, I now have the new cookbook! It arrived in today’s mail, and I am thrilled! Can’t wait to try some of the recipes.

The THM cookbook that came out 2 years ago has an amazing cake recipe. I discovered it not long ago when I was looking for a dessert to make. I had a few peaches that needed to be used, and I was thinking of an upside down cake. This recipe is perfect! The second time I made the recipe, I spread it in a jellyroll pan and made a fig jam-filled cake roll. It just melts in your mouth! Delicious!

Put half the melted butter in the bottom of the pan. Layer peach pieces and sprinkle with brown sugar.

In a mixing bowl, combine the first 4 ingredients. In a separate bowl, beat the egg whites and cream of tartar until soft peaks form. Gently stir in the dry ingredients a little at a time until well blended. Pour the batter over the peaches and spread evenly. Bake for about 30 minutes. Allow to cool before removing from pan. 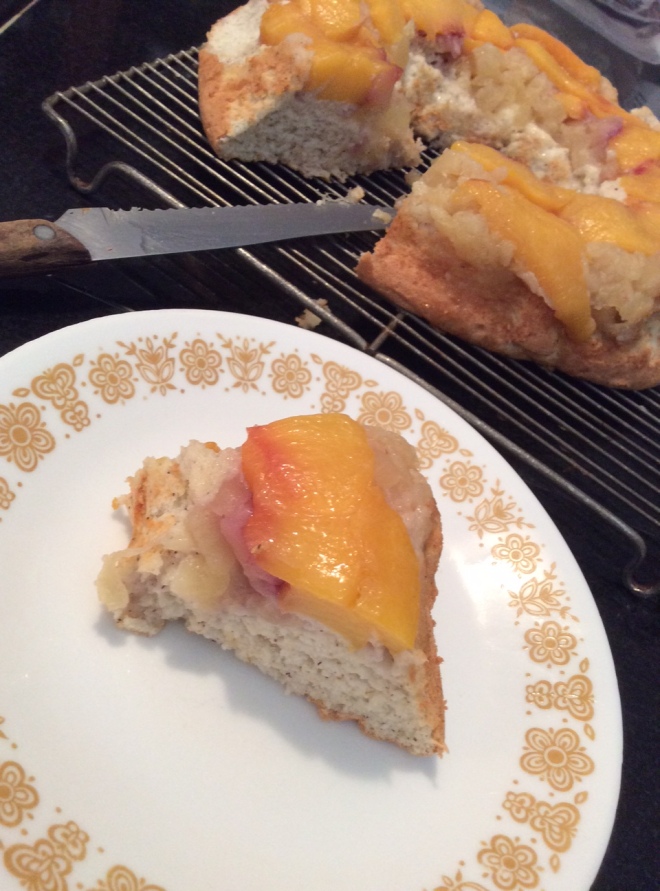