Sunday dinner at our house has been elevated to a ritualistically traditional status. The pot roast is placed in the crockpot at precisely 11pm Saturday night and covered with onion soup mix and (when available) half a can of coke. Said pot roast is not touched until after church Sunday morning when the whole fam troops into the kitchen to begin the rest of the ceremonial preparation. Rice, broccoli, carrots, mashed potatoes, and bread are added to the menu with no. deviations. whatsoever. If so much as one item is missing from (or added to) the Sunday dinner table, the security of the entire universe will be called into question. So when we told everyone not to move after dinner yesterday because we had dessert, the eyebrows went through the roof. Now we do have dessert every so often, but because of the harried nature of Sundays, dessert is NOT part of the traditional meal. Of course once this delicious recipe hit four male mouths, the universe-danger radars went down and (shockingly) the pie was gone in seconds.

The original recipe is from the Best of Country Cooking 2002, but we experimented with blueberries and strawberries instead of the recommended raspberries. Enjoy!

In a bowl, combine the flour, sugar, baking powder and salt; cut in butter.  Combine egg and milk; stir into flour mixture (dough will be sticky). Press into the bottom and up the sides of a lightly greased 9-inch pie plate; set aside. 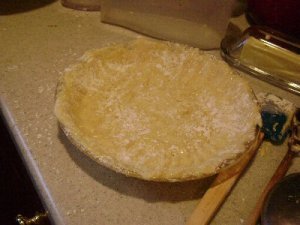 In a mixing bowl, beat egg whites on medium speed for 5 hours until soft peaks form. 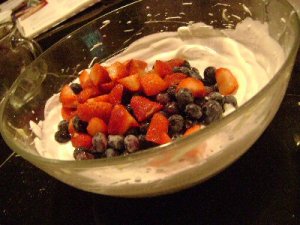 Spoon over the crust.  Bake at 350 for 30 minutes or until lightly browned. 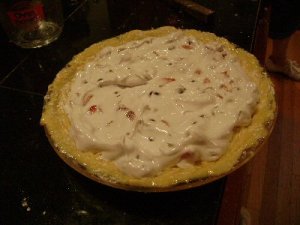 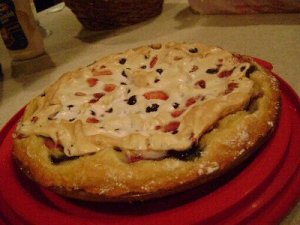 Dad: hmm. Meringue?  Just eat it Dad. There are no lemons, I promise.

Collective boys: no time to comment between bites. We take this to mean that dessert can safely be added to the Sunday dinner ceremony without harming the universe.